On September 11, 2001, we all know the world changed. One of my responses to the attacks of September 11 was to do what Leonard Bernstein says one must do when something violent and horrific happens: “This will be our reply to violence: to make music more intensely, more beautifully, more devotedly than ever before.”

Earlier that year I had attended a three-week jazz workshop at the Banff Centre for the Arts. Tenor saxophonist Jason Gillenwater was also attending, and we became fast friends, playing together almost every day. When we returned to New York, we teamed up with bassist Fraser Hollins and drummer Jeff Davis. It was super convenient as we all lived in Harlem and I had a drum set in my basement apartment (as well as a neighbor named Merrily who loved to listen to us rehearse). Every Thursday we’d get together and play, then head over to Floridita on West 125 Street for plates of chicken with rice, beans, and sweet plantains. Six months later, we recorded our first album at the now defunct (and sorely missed!) Bennett Studios in Englewood, NJ. The incredible engineer Dae Bennett recorded the entire session live to 2-track (mixing as we played) and then mastered the whole thing in an hour. The entire thing took about 6-7 hours total. Fraser ended up moving back to Canada, so Sean Conly stepped in. Sean and I have been friends since 1993, when we attended William Paterson College together. A few years later, Jason moved to Boston with his wife who was attending Harvard Law School, and then to California.

Jeff and Sean and I have played together ever since, and Sean is the bassist in my band Deathblow (which also includes Michaël Attias on alto and baritone saxophones and Satoshi Takeishi on drums) and also in my Pirkei Avot Project (with Ayelet Rose Gottlieb or Tammy Scheffer on vocals, Daphna Mor on recorders, and Satoshi Takeishi or Daniel Friedman on percussion).

We’ll be celebrating this milestone at Flushing Town Hall on Thursday, November 11 at 7:30 p.m. Jon Irabagon will be playing tenor saxophone, with Sean playing bass and Jeff on drums. We’ll play songs from the two am4 records, and I’m thrilled to be getting the band back together after so much time, and especially after being in lockdown for so long. 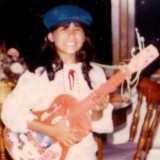